Canada is famous not only for its hockey, Niagara Falls or even the size of the country (the third place in the world!), but for its lotteries: Ontario 49, Lotto 6/49, Daily Grand, Lotto Max… Let’s find out which Canadian lottos are the best.

Best Canadian lottery to play in 2018

You hardly can say which Canadian lottery is the best to take part in, because each lottery is good in its own way. But each of them has its unique particularities.

A piece of history of the Canadian lotteries

Organizing Committee urged the authority to hold some lottery draws with the main goal to raise funds for the games. There were held only 9 lottery draws that took place from 1973 to 1976. A total amount of $23 million was raised. Such a nice sum to keep things going, isn’t it?

However, Quebec still suffered hardships after the Olympics, so in 1976 it was decided to continue holding lotto draws in Canada. The Canadian government still had to pay debts. Some provinces in Canada, where lottery draws were also held, expressed a wish to manage their own income. Thus, Quebec still remained in debt.

Nevertheless, lotteries have become incredibly popular with ordinary people and, they say, even saved the Canadian economy from collapse.

The most famous Canadian lottos are Ontario 49, Lotto 6/49, Lotto Max and Daily Grand. They are very popular among residents of the country (and in the whole world) because of their massive prizes and good winning odds.

Daily Grand is a lottery that is played all over Canada. For just $3 you may win a prize of $1,000 a day for a life. That is truly a game of your life!

To win this lottery, you need to match 5 ordinary ball numbers from 49 and one supplementary ball number from 7. It’s that simple!

If you wish to win any prize in this lotto, then your odds are approximately 1:12,3. However, the odds of winning the Jackpot are expected to be high — approximately 1:13,348,188. That Jackpot is worth fighting for!

Ontario 49 is a usual 6/49 lotto. Paying just $1 for one line, you get an opportunity to win the Jackpot of this lotto that usually starts at $2,000,000! Even if match just two numbers of the winning combination, you will get the Free Play bonus of $3.

Ontario 49 has 7 prize categories, including the “Free Play” one. Seven balls take part in the draw — 6 ordinary balls and 1 supplementary ball.

Your odds of winning any prize in this lottery are approximately 1:8.3, and it makes Ontario 49 better than Daily Grand, but its Jackpots are not so impressive, though!

Oh, odds of winning a Jackpot here are the same as of the Daily Grand: 1 to 13,348,188. Though, when people come to Canada and ask which lottery has the best odds in Ontario, they are advised to play this particular lottery!

The first draw of this extraordinary lotto took place in 1982. This was the first lotto where players were allowed to choose numbers themselves.

Lotto 6/49 lottery is almost the same as Ontario 49 and has the same game matrix. To win the prize, you need to match 6 numbers from the winning combination. Seven balls take part in the game. Lotto 6/49 has the same winning odds as Ontario 49, but its odds to win the major prize are less tempting: 1 to 13,983,816 for a ticket that costs $3.

Lotto 6/49 has a minimum Jackpot that starts at C$5 million (that is a bigger amount than of the Ontario lottery) and rolls up from draw to draw until it’s scooped by some lucky man (or woman!).

The largest Jackpot for this lottery was scooped in 2015. The prize was $64 million!

The last lotto we are going to cover today is Lotto Max. This lottery is a young one — the first draw of it took place in 2009. Its drawings are held every Friday.

Ticket for this lotto usually costs $5. The player receives three sets of numbers for each $5. The Jackpot of Lotto Max starts at $10,000,000 — an impressive amount! — and rolls up with each draw if it wasn’t scooped by anyone.

The largest Lotto Max Jackpot was scooped in 2017 — some lucky man scooped $60 million!

The USA is next to Canada! Read about amazing American games!

So, which Canadian lottery has the best odds?

We can’t really say which lotto is an absolute leader in this category because both Ontario 49 and Lotto 6/49 have equally the best odds of winning.

If the Jackpots is all you need, then choose the Daily Grand lotto — this lottery combines good winning odds and great Jackpots that you would definitely like!

By the way, do you know the best lotto site to play Ontario? Let us know in the comments! 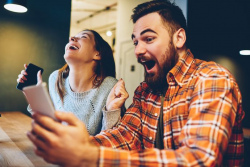 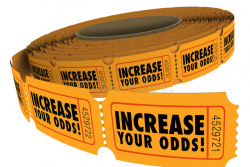 Megaplier and other lottery multipliers: why do you need them?